Marie Barber joined the Clayton County Water Authority (CCWA) Board on October 6, 1999 as the first female member in the history of the utility. She served for many years as the board’s Secretary/Treasurer and as Board Chair from December 2012 – February 2015. In January 2018, she was elected Vice Chair. 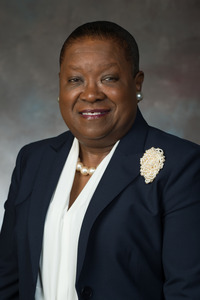 Barber knew that after her sons left home for college, she wanted to give back in some capacity to Clayton County for all that it had done for her family. She began to make her presence known in the county by volunteering, as well as participating in Leadership Clayton, Grassroots Leadership, and other community groups.

Clayton County Commissioner Carl Rhodenizer, seeing her at various functions, asked if she would be interested in serving on the Water Authority board. She was excited by the invitation, knowing that it would be very different from any board she had previously served on, not to mention challenging because of the importance of CCWA policy.

Barber began paving the way in public service for women and African-Americans in Clayton County when she joined the CCWA Board as its first female member. She saw this as an opportunity to make a difference in her community, while acting as a role model for others. Thus, she was honored for the chance to serve the Authority and her home county in this capacity.

Looking back, Barber feels that what she once saw as a challenge has now become a very rewarding, not to mention educating, experience.

“Before joining the board, I just thought you turned the tap on and water would come out,” she recalls. “I had no idea what went into getting that water there.”

When asked about what she has enjoyed most about being a CCWA board member, Barber says learning the intricacies of a complex organization that provides a vital community service.

Barber acknowledges that she has learned a great deal from her fellow board members as well. “I have learned so much from each individual. Everyone is truly a team player and that is what makes us a great board.” That teamwork has also showed positive results for how the Authority stacks up against comparable water utilities.

“We truly have one of the best utilities in the world,” she adds. “That is obvious when people from other countries come to visit our facilities. That is also a reflection of the great employees we have at the Authority from the top position all the way down. It takes a whole team to make us what we are today.”